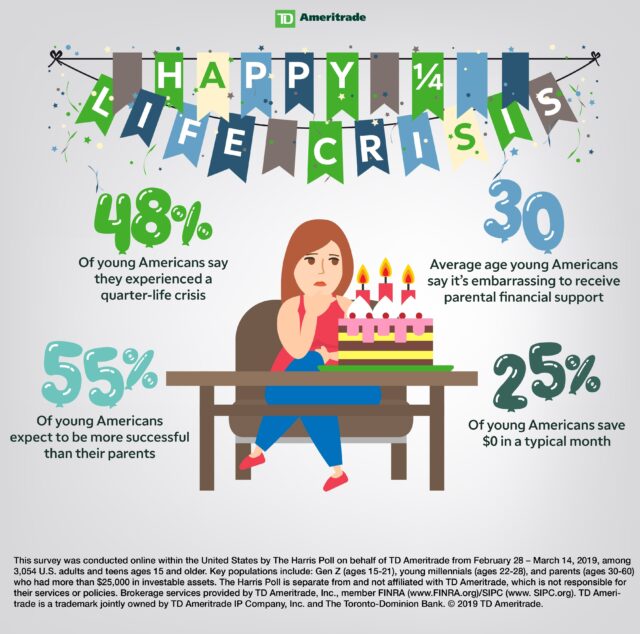 In 2019, the Harris Poll conducted an online survey with an observation placed mainly on Gen Z and young millennials Americans and how well they were going through their life, especially economically. The results gathered were  leaning toward prominent cases of quarter-life crisis inhibited by a large percentage of these young Americans. The Harris Poll recorded that 48% Americans experience mid-life crisis . The staggering number must have many different factors colliding to create the problem at hand. Although the Harris Poll only had Americans participated in their survey, in this essay, I would like to highlight a perspective of how their results can also be found true among us Gen Z and young millennials of Indonesia to give a reactionary perspective of how quarter-life crisis has been a worldwide phenomenon.

Shallcross (2016) points out to Cyrus Williams, a professor and counselor of psychology, that a quarter-life crisis is a culmination of mostly depression and anxiety that are formed because of the transitional phases young adults have to go through to enter the real world with their own self-understanding outside of what have actually been given and told to them. This quarter-life crisis ranges from many aspects from psychological, social, economical, etc. Thus, branching from those main aspects, we can trace further reasons of a quarter-life crisis developing in a person’s life because of the hardship of finishing their education, finding a job, meeting their parent’s expectations, and many more. Although on a surface level it can be argued that previous generations went through similar hardships,  we  need to go deeper to understand why us Gen Z and young millennials go through a harder time of hardships. In finding that deep answer and understanding, I would like to discuss how the younger generation’s reactions against the post-modern world differs from their older counterparts.

As Samuel (2020) rightly discussed, many people of the younger generations (from Gen Z to young millennials) have grown a strong disdain toward the older generations, especially the Baby Boomers. Samuel mentioned that the boomer’s generations are often seen to have plummeted the natural and man-made resources in the world. Natural resources refer to the boomers carelesness on enviromental issues such as global warming, carboon footprint, etc. While man-made resources refer to mostly economy-related issues like real estate prices, requirements of professional positions, the cost of starting a family and building a household, etc. Even though these issues are real and understood by the younger generations, many older generations are still out of touch. For example, it is common to hear someone on the internet complaining that their parents think that you can just hand over a resume to any workplace and expect an interview and hiring to come shortly afterward. In reality, especially if you are an American, you have to take massive student loans just to finish your undergraduate studies and compete against thousand of other applicants just to get a position that pays you slightly above the minimum wage with requirements much more complex than a proposal to attend an ivy league university. This example provide only one contrast of the younger versus older, which is nothing new really. Back in the 60s for examples, the Gen X may have thought that  they had it the hardest against their out-of-touch older generation counterpart, but the same Gen X today may not understand the struggle of Gen Z and young millennials as they have changed to be that older generation.

As previously mentioned, this issue extend not only in America alone but also worldwide, including Indonesia where I am living at right now. Liotta (2019) from Vice Indonesia  found that economy is the issue that Indonesian young millennials and gen z struggle with, alongside progression of work, health, politic, technology, to other issues. The reason for those problems do not go too far from what happen in America, it revolves back into the out-of-touchness of the older generations in maintaning the society for those who are not their generations. Another VICE article by Jameson (2021) made aware how much more nihilistic the current younger generations have been. The tolerance and acceptance against death is higher than the older generations though they likely still fear if the actual event has to come. The ever growing issues for Gen Z and young millennials lead them to building various forms of escapism, especially materials. When they do not see the need of spirituality, then materiality is all they have. This may likely be why the Harris Poll survey mentioned that around 25% of Americans do not save their monthly allowances, as they have grown detached toward believing in better life. Not much different with the young generations of Indonesian, especially from a big city like Jakarta, whose struggle to compete and complete lead to the easy temporal fix of escapism.

In short, what the Harris Poll found in their survey should not be taken lightly. The burden of the younger generations are very real and are all over the world, not just in the United States alone. Without the interverence of the older generations who have occupied the important positions in society, it will be very hard for the younger generations to find a platform that is actually meaningful. Various progression in today’s society through techology and branching onto socio-political, psychological, and philosophical deliberations are constantly produced to increase knowledge and awareness that can help the younger generations to find a meaningful place in today’s post-modern world, but it will never be enough without the correction of previous mistakes that dominate the sliver of these new needs and demands. Cautions of reactions toward this discourse will not end anytime soon. There are far too many nuances to saturate a definitive acceptable solution. At most that I and many other younger generations can do, is either accept or idealize, that is all.