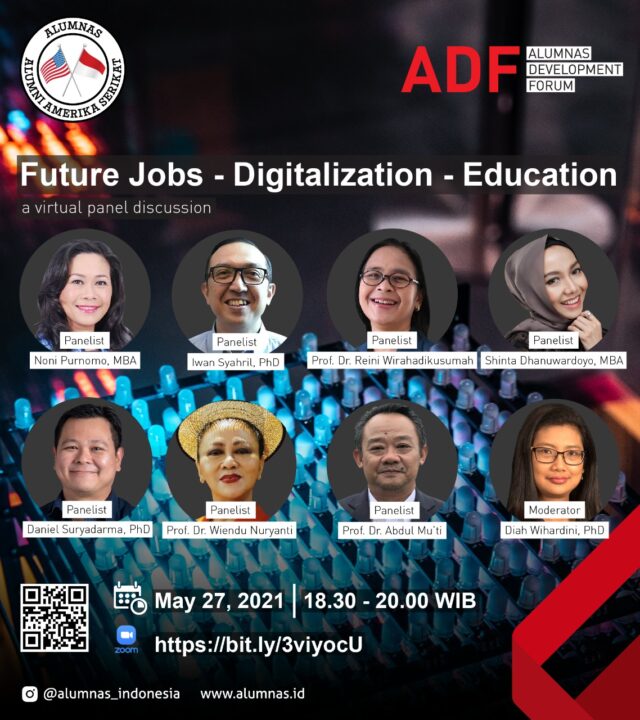 As one of a US university alumni, Irfan Rifai had a tremendous opportunity to have joined the first of discussion series  held by Alumnas Development Forum (ADF), a part of Alumnas ( Indonesia- US University alumni association) on May 27, 2021. Acting as the moderator of the event was Diah Wihardini, Ph.D, a Binus Global director and a UC Berkley’s alumna. She hosted Iwan Syahril Ph.D, the Direktur Jenderal of Guru dan Tenaga Kependidikan for Ministry of Education and Culture (MoEC), Prof. Reini Wirahadikusuma, the rector of Bandung Institute of Technology (ITB), Prof. Abdul Mu’ti of Islamic University of Syarif Hidayatullah (UIN Jakarta), Prof. Wiendu Nuryanti of UGM, Daniel Suryadarma of Asian Development Bank researcher, Shinta Danuwardoyo, founder of Bubu.com, and Noni purnomo, the Director of Blue Bird.

Here is a few key take aways from the webinar:

Iwan Syahril opened up the discussion by presenting the the philosophy behind the development of “Merdeka Belajar”  or freedom to study initiative. The objective of ” pendidikan berkualitas bagi seluruh rakyat Indonesia”  with the supports of various levels of social units such as families, communities, schools, and many more.  Adding to a short presentation by Pak Syahril, Prof Abdul Mu’ti highlighted the complexity of our country’s condition that adds to the disparity of quality of education between Indonesia’s provinces. He suggested that our education system should be prioritised on both  individual s’ and the nation’s development as a whole.  Thus, the development of national curriculum should be future oriented yet remain grounded on the development of the country’s identity and characters. He also stressed on the importance of creating next generations who have work ethics, creative, and entrepreneurial. 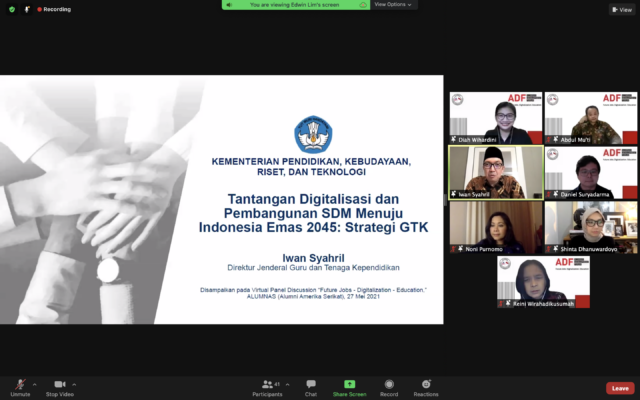 Daniel Suryadarma opened up his presentation by asking a provocative question: Does Indonesia have the people to be globally competitive? To be competitive, he said, Indonesia needs to have skilled workers and innovators. The question that remains is :  “do our schools and their system provide or support the creation of  innovators?” Furthermore, he believed that Indonesia faces two big challenges: Education quality is low and stagnant and the pipeline of innovators is almost non-existent.

Two academicians, Prof Reini and Prof Windu and two professionals, Noni and Shinta, were responding to the three panelists by  posing intriguing questions on the relationships between education, people’s characters, link and match between education and industry, distant learning, challenges in infrastructure,  the lack of STEAM personnel and quality, and how creative economy would become an important pillar in the years to come.

It was a dense and  insightful discussion. Diah Wihardini was doing a wonderful job moderating and meditating the discussion. Look out for more quality events from Alumnas. (Ed.)