Ever since 1990s, fighting game genre has been well-known to have appealing concepts with intriguing characters and faster gameplay compared to other video game genres. Since this research is capitalized for constructing outputs based on gender identity stereotyping, King of Fighters XIV, the recent itinerary from SNK’s King of Fighters (KOF) series, is the best choice due to its almost equal numbers of male and female fighters to choose from as well as interestingly various characters’ storylines and designs. This study focuses on KOF XIV dialogues and cutscenes happening throughout the gameplay and how they can be utilized as references of gender identity stereotyping within creative writing process. There are equal numbers of male and female participants from Bina Nusantara University, aged 18 to 21 years old. Each of them is exposed to KOF series and then asked individually to construct a short story consisting three required main scenes; self-introduction, facing enemy and casual talk. This study hopefully enables to broaden the pedagogical and creative spectrum by adding video games, specifically fighting games, as one of the prominent tools of learning process, especially in the field of creative writing. 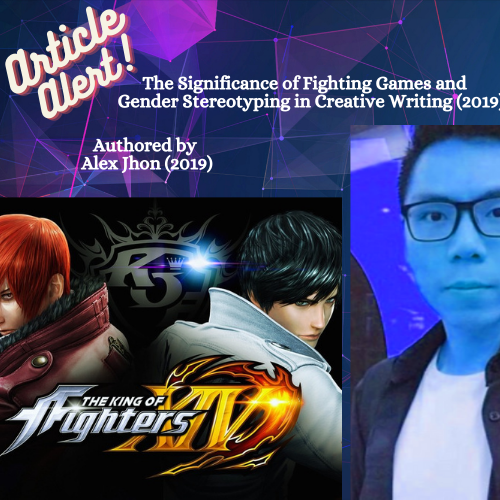