*A junior  at English department

In the world’s current condition where most interaction are held online, there are out flowing webinars available that embrace interesting topics to help people learn new things despite the pandemic. And being one of the students in the alternative internship track program, I am fortunate to have an opportunity to participate and learn new things in the webinars well-prepared by some of the outstanding professionals as the speakers. In fact, it has been a fun and informative learning journey as where I had come to the last webinar on the program track. It was about ‘Linguistics in content creative industry’ presented by a tale morphologist from Anantarupa Studios, Ms. Ninoi Kiling. At first, I do not have any exact idea on what it is specifically about. Then, after taking some guess, I thought it could be about a story writer for books or any other reading medias. Yet eventually after some minutes being in the webinar, I caught something more exciting and interesting than what I have thought beforehand. It is not only about writing on various reading materials, but also on interactive medias such as film, animation or even game production. In my part, it is a refreshing webinar topic to have taking part in where it gives new perspectives to us students. Additionally, Ms. Ninoi only did not teach us the technicalities but also motivate us to achieve our target career in the future. 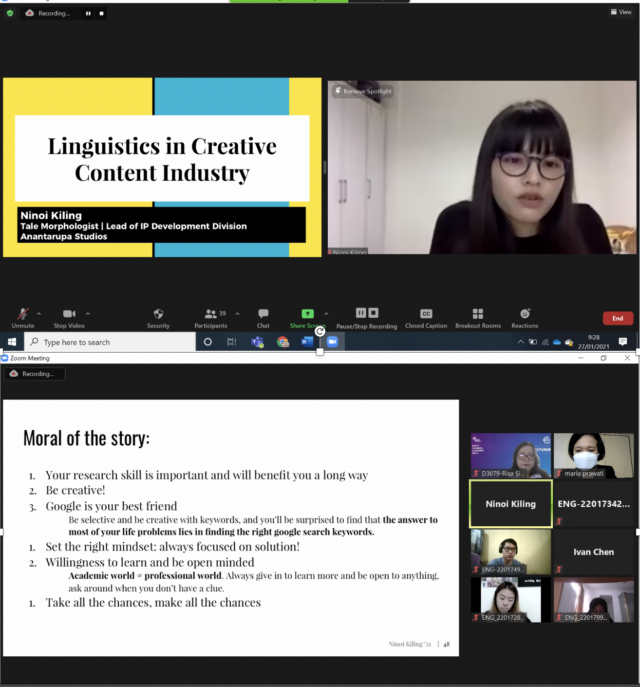 One of the interesting talks, Ms. Ninoi have presented is how to form a boring and old thing into an exciting innovation. One example she gave us was the oldschool spinning toys made from natural wood that was later invented to be colorfully modern beyblade toy. With best concept, characterization, platform, execution, transmedia and other fresh approaches — uninteresting things could be a sensational invention. Various medias such as film, animation, game, music, merch, toys, and so on that make the concept more alive and interactive to the audience. Personally, characterization is the first strongly necessary to make each of the characters personal and real with the linguistic appeals. Linguistic factors are extremely needed in any concepts in order to visualize a communicable and approachable idea. These are not only for the characters, but also in the delivery of information to have a natural flow according to the targeted theme. Moreover, execution and other parts of the productions weighs about the same in order to bring out a remarkable piece. Therefore, not only the concept and the technicalities are need, but also the skilled people behind are needed to put together an excellent production. In summary, every masterful piece are made with both technicalities and naturalization factors in order to make it sold in the public.