The 2nd day of the Webinar was held on the 18th of December 2020. I had a great time joining the collaborative webinar because we could meet other Binus university students from the Faculty of Humanities and students of Adventist University, Philippines. Held via zoom, the event  started at 09.00 and ended at 11.00 am Jakarta time. 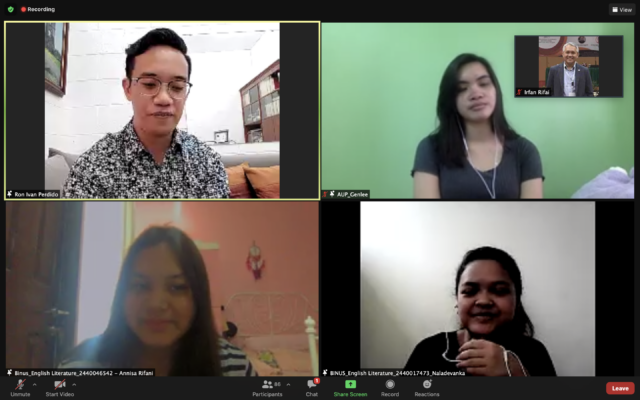 We started the Webinar with a game that we played on Day 1 : the Heads up game with a twist! Yesterday we didn’t have a winner for this game, but we had a winner on the 2nd day! I really wanted to join the game, but I already did it yesterday so I gave other students a chance. It was fun to watch. After we played some games, Miss Paramita from Binus gave an academic speech on ‘Introducing Indonesia’ to give some information to the AUP students from the Philippines.

The third session was  ‘Literary Criticism,’  session which was presented by Mikoy Sagario Naidas from AUP. Mr. Naidas gave us so much information about Literary Criticism that we haven’t learned. After the presentation, Mr. Naidas gave us a workshop to do with our groups. The workshop was, ” you have to read the poem first, and then you write words, phrases, or clauses that they can associate with the poem (like how do they feel, understand, think about the poem and/or what they reflect from the poem’s meaning or message)”. My group was breakout room 2, and I got to know other students from Binus. They’re from International Relations, Chinese Literature, and Japanese Literature. It was very hectic and chaotic at first because we had to do a presentation, but eventually, we didn’t. It was a short one of discussion, but it was very entertaining.

The last session was  ‘Milieu of the novel’ by Jessica Supangan from the Philippines. She presented her novel titled ’a hundred weddings’, which  was released in 2019. The book genre was  romantic comedy. It was very amusing to know that Miss Jessica had written the stories at 15. She knew nothing about American romance stories, but Miss Jessica could bring it up to her novel and received so many good responses from the reader. Miss Jessica gave us so much motivation to motivate us to write a good novel in the future.

The Webinar was very enlightening for the Literature students, starting from Literary Criticism and motivation from a book writer. I can’t wait to look forward to the 3rd day or the last day of the inspiring, collaborative webinar! (Nala)