On December 20, the internet was buzzing after comedian Coki Pardede published a post on Instagram. In it, he posed in front of a screen showing a picture of starving African children while holding a bubble tea drink. He captioned the picture “Mari kita berbagi” – “Let’s share”.

The post has since been deleted but it did sparked controversy on whether it is ethical for Pardede to do so. Exploiting the struggles of those who are unfortunate for his own gain. Many were quick to point out that his post was tone deaf and in bad taste. Surprisingly, not all of the reactions were controversial. Some get behind Pardede’s defense, blasting on Twitter stating that it was merely a “dark joke”, a “satire”, and those who criticized the post “have no sense of humour”. The question is, where is the line for dark jokes? What is a satire? What constitutes a dark joke or a satire? 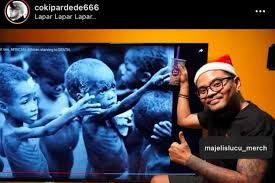 This is not the first time Coki Pardede caused uproar and controversy. In fact, his whole social media presence is based on that. He wants to affect as many people as possible. His posts are always a bait for controversy, it is as if he is fishing for it. His audience rejoiced for his ‘dark jokes’ and ‘satire’. Thinking their behaviour constitutes as open-minded while it is actually just ignorance masked as cheap humour. Before we throw words around in defense of something, we might as well try to understand it first.

Satire, if used correctly, is an effective tool in literature. It uses irony and humour to deliver a jab to something, someone, an institution, etc. But you also have to be aware that satire is used from the ground up. You ridicule those in authority, not the other way around. If you are someone who lives a privileged life and you make a joke out of the suffering of others, is it really satire? The message gets lost and it is just bad humour, not a brilliant take or criticism of society.

“Dark Joke” is a term that has been thrown around amidst all of this. Jokes with dark connotations does exist, I found a couple examples to demonstrate how it is exactly:

2. Even people who are good for nothing have the capacity to bring a smile to your face, for instance     when you push them down the stairs.

Do you see the pattern? The jokes tickled a person but did not diminish them. The first joke pokes fun at the thought of a person in the electric chair, during their last moments, asking for support by holding hand with the priest. The joke is, the priest would also be electrocuted. The second one is something that is relatable to pretty much everyone. How many times have you been annoyed at someone that you think you are going to kill them? You never acted on it because you know better. The punchline is the idea of harming said person.

Take the works of Charlie Chaplin, for example. His film, The Great Dictator (1940), mocks the entire idea of fascism. Chaplin himself even played a character named Adenoid Hynkel. A not-so-subtle jab at Adolf Hitler, leader of the NAZI Party. The criticism was directed from the ground up, challenging authority. A contemporary example is Jojo Rabbit (2019), a satire-filled, dark-joke-induced film about a kid whose imaginary friend is Adolf Hitler. Those films are a perfect study case for the correct use of satire and dark jokes as it mocks the establishment that was oppressing minorities. They were confronting oppression with humour, ridiculing the antagonist as a way to stand up for themselves.

Dark humour is not there simply to mock any people around. It aims to deliver the ugly truth with a comedic take, using laughter as a weapon against persecution. According to the American Journal of Sociology in 1942, dark humour aims to strengthen the morale of the oppressed and undermine the oppressors. If you compare that to Coki Pardede’s supposed joke on Instagram, is it really satire and a dark joke? The oppressor is mocking the oppressed, it is ignorance.

Humour, joke, comedy, it comprises a set-up and a punchline. In this particular issue, I do not think there is a punchline at all. How exactly is starving African children a punchline to some privileged comedian from a developing country? How is the suffering of others acceptable as something to be laughed about? Life isn’t all that perfect, everything is subject to criticism. However, if your idea of comedy ridicules the suffering of the oppressed, you are not a really good comedian (Kya).