In the context of  creating and recreating new forms of anticipated (future) social interaction for the immigrant groups she was working with, Enciso (2015) argues that principles of sociocultural theory and dramatic inquiry can work together to ‘bring the future forward’. She specifically focused on the discussion and use of prolepsis and telos to support her arguments. Furthermore, Enciso ( 2016) put forward  three important practices to bridge sociocultural theory and dramatic practices: the collective creation of the world between teacher and students,  the reflection and transformation through mediation, and  persuading (persuasion) dialogic and persuasive opportunity.   I would use these three points she made as bases to discuss the book further.

In the context of sociocultural theory, Urietta  (2007) believes that identity is about how people come to understand themselves, how they come to “figure” who they are , through the “worlds” that they participate in and how they relate to others within and outside of these worlds . ­­­­­Holland  (2003) defined figured worlds as the world where  one person positions  himself in the role (s)  or identity  that he assumes or figures, who carry out his  tasks and who also has styles of interacting within, distinguishable perspectives on, and orientations, “ through the works of other participants” . Like activities, it is a social encounters in which participants’ positions matter. Furthermore, Holland also stated that figured worlds are “ socially organized and reproduced  and distributes  not only by relating actors to landscapes of action (as personae) and spreading our senses of self across many different fields of activity, but also by giving the landscape human voice and tone”  (p.41).   In the figured worlds, actors are shaped to the coproduction of activities, discourses, performances, and artifacts.

Corresponding to Holland, Edmiston believes that  “ like fictional story worlds, the real worlds can be understood in terms of people’s experiences and understanding of shared narratives and that our social position in relation to those social narratives  is socially and culturally co- constructed. He calls the acts of understanding the narratives and experience as ‘ active learning’. Since it involves at least two people making meaning, I would argue that it can be called as ‘social active learning’.  This social active learning can then be understood better by using  “ social imagination, fictional or factual text may begin to come alive, mentally, and socially for a group when people talk, move, and interact collaboratively as if they are living within an event in the world of the narrative.   He calls the as if act   of living in the world of narrative as “dramatic learning”.

In the figured world contexts,  being active in learning is similar to take agency (in learning). Inden (1990: 23, in Holland, 2003) defines human agency as the realized capacity of people to act upon their world and not only to know about or give personal or intersubjective significance to it. That capacity is the power of people to act based on objectives  and conscious considerations of past – present ,  in interrelationships with one another, to reiterate and remake the world in which they live, in circumstances where they may consider different courses of action possible and desirable, though they may come from not necessarily similar  point of view. In relation to the discussion on identity and agency ,  Edmiston ( 2014) believes that the social imagination and dramatic inquiry pedagogy are significant mediating tools for developing teachers, as well as students’ agency.  The agency during the dramatic learning occurs when people ( students and teachers)  choose to act  differently ,  respond to dialog, and improvise with in and out of the imagine worlds. These actions they chose to do, according to Edmiston, can make the difference when they make meaning (p.232).

In Holland’s words, human agency comes through acts of improvisations ( in Edmiston, p. 232). Furthermore, he and his colleagues ( 1998) argue that people with agency ‘author’ / ‘figure’  the world that has rules, social practices, and cultural norms.  In relation to that, Edmiston suggests that teachers aim to develop students’ authorship and sense of agency in relation to others, for example, by creating a community of learners (p.70) as a start.

According to Edmiston, mediating tools are not limited to pictures, videos or even drawings, in his opinion, mediating tools include talking, moving, writing, drawing, and listening to or reading words.  Both Vygotsky and Bakhtin, as well as Edmiston, believe that language is ‘tool of the tools’ or the ‘primary tool’ that people can use with others to mediate meaning making.

On the usage of tools for mediating learning or meaning – making, Vygotsky  (1934 / 1986) argues that  “ ideas and information cannot transfer directly from one person to another. Rather people mediate their learning ( understanding)  by using multiple tools”. In this book, some images are shown to point out the tools being used. Some of them, for examples, are pictures from book (Boris picture, p.143), a streaming video of swimming whale (p. 151), and the drawing of swimming whale on the whiteboard ( p.153). The use of multiple tools in exploration of the meaning, according to Holland and Cole, (1995, as in Edmiston, 2014) affects the potential for meaning-making, since every tool has different ‘affordance’.

Holland (2003) states that the culturally constructed “external” objects are signals to control ones’ psychological processes. The use of mnemonics, in the western society,  according to Holland is a form of  transition from the use of one’s memory to active control over it . Mediating devices, in this case, develop within a particular point of social activity, a place in the social world that identifies and organizes them.

Rogoff & Lave ( 1984, quoted in Gupta, 2007)  believe that Lev Vygotsky conceptualized thinking as a process that entails cognitive processes such as actively remembering and drawing on memories, contemplating, planning and perceiving rather than merely the static acquisition and possession of memories, plans and cognitions . Reflecting is an integral part of dramatic inquiry strategies that normally occurs when people are outside of the narrative world. In dramatic inquiry, as people step out of the imagine world, they can go back to the  experience  in order to understand what they did. Enciso ( 2015) and Edmiston (2014) believe that the acts of going in and out ( and reflect) of the narrative world, is needed for authoring meaning. Edmiston suggests that reading, writing, drawing, or making tableaux can become inherently active and reflective tasks as the activities can provide tools that hold past experiences.  To me, they are like photographs  that hold the memory of a fishing trip : by looking back at it, one can restore the emotion ( the happy feeling of getting a fish) and the cognition ( fishing techniques one used). Individuals can share these individual emotions and cognitions as groups. Edmiston suggests that the reflection can be transformed into reflective dialog that involves more than one person in order for students to reflect from the past experience of being in the imagined world to co-construct meaning.  Dramatic reflection is another variation of reflecting activity that Edmiston introduced. In this kind of reflection, some participants can be positioned as ‘spectators’ and others are ‘ performers’. As spectators, participants can interpret, analyzed, and evaluate the performance. 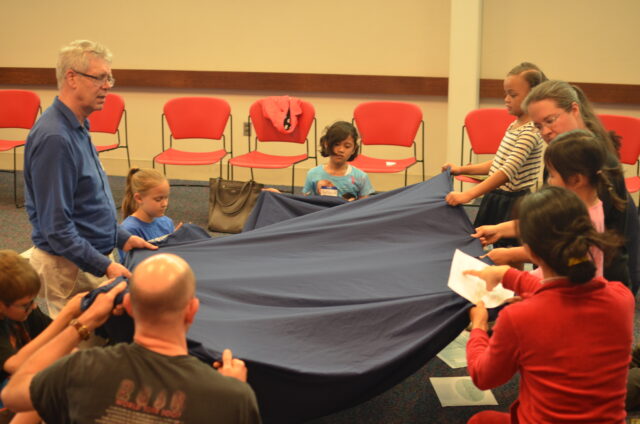 Parents and children collaborating to make meaning through dramatic inquiry

When using the word ‘transform’, Edmiston often refers to it as an action verb that resembles spirit of moving from static / stagnant position to  a more dynamic – conversational state. He used the term to refer to transform teaching, community, and the changes from monologic to dialogic situations. To transform teaching is to start looking at one’s practices critically and move away from the monolog practices, and start being dialogic , as well as authentic teachers. Meanwhile, to transform the community in Edmiston’s context is to help the community grow collectively as one which communicates to each other to achieve similar goals and shared values. The third one is to transform a monologic stance that is often practiced by parents and teachers or adults in general when dealing or interacting with younger children.  Edmiston suggests that adults  to create genuine dialog with the young minds , in which their  consciousness is challenged or changed.

Edmiston has been highly influenced by Bakhtin’s dialogic approach. It is well represented in his book how Edmiston repetitively mentioned that  dramatic inquiry learning is built on conversations and in the exchange of ideas / opinions in and out side of the imagined world.   Vygotsky ( as in Edmiston, 2014) argue that  “learning awakens a variety of internal development process that are able to operate only when the child is interacting with people in his environment and in cooperation with his peers”.

The interaction that happens to a child, according to Edmiston ( 2014, p.41),  influence both their  cognition and emotions at the same time ( Vygotsky cited by John – Steiner, 2010).  Dialog, according to Edmiston, is not people talking while stating their opinion even if they are pretending to be someone else. Nor is it a teacher presenting a view point or talking while telling students that they need to listen ( that’s monolog). For Bakhtin, dialog requires that you enter into the viewpoint, or consciousness, of another person and allow their perspective to intermingle with yours. To socially move and construct meaning together, in and out of the world, dialog is seen as the most important means.  Bakhtin suggested that without participation in dialog, one must accept other people’s “ready-made truths”  rather than grow in understanding by developing meaning in discourse with other people. To sum this up, Edmiston underlies that: “Truth is born between people collectively sharing” (Edmiston, 2014).

What is the point of dialoging? By combining dramatic and active learning, Edmiston argues that “learning is making meaning and authoring understanding in dialog” ( p.4).  What happens during dialog? In dialoging, the world is ‘half theirs’ and ‘half yours’. It means that the complexity of the world lies in the interaction happening between parties in which each responds to other’s opinions

The book being reviewed was certainly not written on the purpose of convincing administrative workers or policy makers, instead, it aims to help teachers improve their teaching practices for the sake of students’ learning. The book is both a practical and a theoretical  book. However, to understand the content of the book, one will need to have a dramatic background,  experience a workshop,  or a hands on experience to understand the concept and the connections between concepts with  the practicality of the book. The book was written in such a recursive manner that one can always find and relate one chapter or subchapters with others.